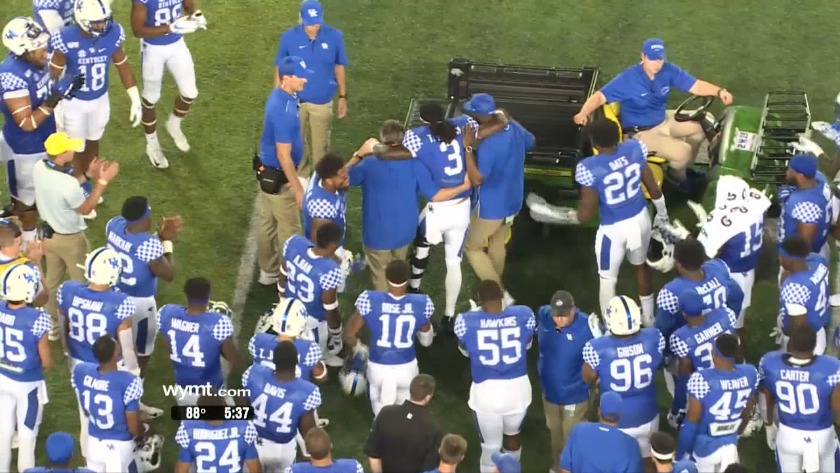 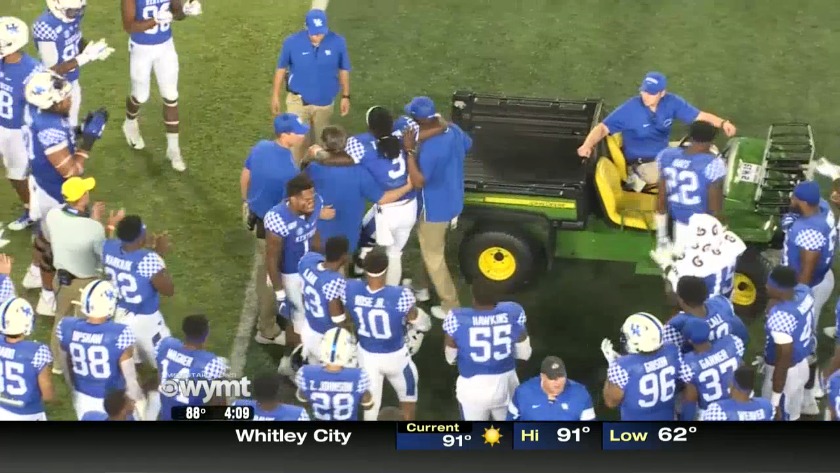 LEXINGTON, Ky. (WYMT) - Kentucky confirmed on Sunday that junior quarterback Terry Wilson will miss the remainder of the season with a torn patellar tendon. The Wildcats will miss the second-year starter.

Kentucky quarterback Terry Wilson (3) is attended to by teammates after being injured on a play during the second half of an NCAA college football game between Kentucky and Eastern Michigan, Saturday, Sept. 7, 2019, in Lexington, Ky. (AP Photo/Bryan Woolston)

"Obviously very disappointed for Terry Wilson, and greatly appreciate what Terry has done for us, in the leadership that he's given this team and the way he's played the past year and two games," Stoops said. "It's been a long time since somebody has helped us win 12 out of the 15 starts that he had. So that's quite an accomplishment for Terry."

Wilson was obviously down after his injury on Saturday night.

"He was disappointed, like you would expect. You know, he's worked very, very hard, and, you know, he was down, but he won't be defeated."

Despite the injury, Mark Stoops expects Wilson to make a full recovery.

"I do anticipate a full recovery from that. Should not be an issue. Very similar, really the same injury that day or so Darius West had. And day or so came back with no hiccups from that whatsoever," Stoops said. "So anticipate a full recovery from Terry, and we'll miss him this season, but excited to watch Sawyer grow and to give him the opportunity to lead us, and we're confident in him."

The junior QB will make a full recovery, but Stoops confirmed that he will not redshirt a year.

"Terry was three for three. So it won't matter. Next year will be his last year."

In addition, Stoops confirmed that there was no surgery date yet for Wilson, but that he will be a positive influence in the QB room for his replacement, Sawyer Smith.

"He'll be there and just be a positive force for Sawyer, and you know, he's been through it, and for all the quarterbacks and try to help in that room, I'm sure," Stoops said.

Wilson was 33/52 in his seven and a half quarters this year. The dual-threat QB threw for 360 yards and two touchdowns, go along with 44 rushing yards and a touchdown.