Former UK Wildcat, turned author is using his story to inspire others 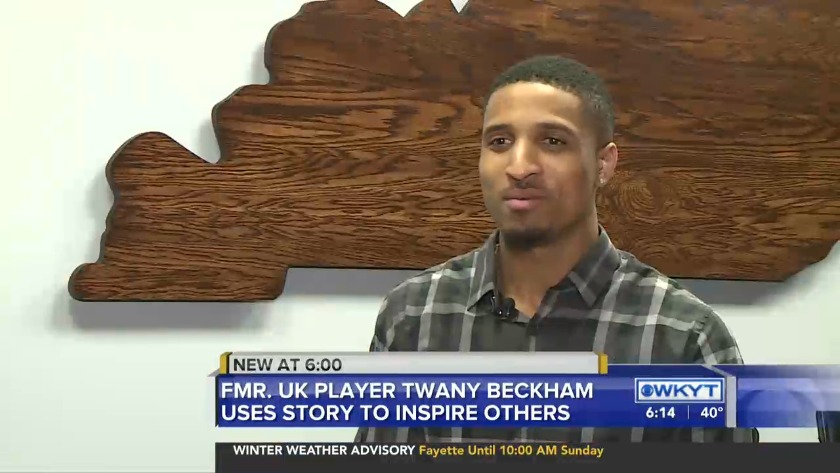 LEXINGTON, Ky. (WKYT) For many youngsters growing up in Kentucky and playing basketball the dream is to one day suit up for the blue and white.

Twany Beckham had that dream and he eventually made it to the University of Kentucky, but the road wasn't an easy one to Lexington.

In the end his time at UK didn't pan out the way he wanted.

Now the former UK Wildcat has a new book out and is using it to do what he calls, change the culture.

His time may have been short lived at the University of Kentucky, but this transfer guard made the most of every moment.

"Playing for UK was a dream come true for me ever since I was a little kid," said Twany Beckham.

Twany Beckham's dream to shoot hoops on the big stage seemed to always come with setbacks. The Louisville native wasn't recruited by UK, he ended up at Mississippi State and then only after double hip surgery did he find himself walking on at UK in 2011. A week into practice he earned himself a scholarship.

"It was unbelievable being around NBA superstars, practicing with the best talent you could practice with every single day. Being coach by someone like Coach Calipari, somebody I admired from afar," said Beckham.

In 2012 Beckham was part of the National Championship team, but again another setback. Beckham underwent career ending back surgery. It was what Coach Cal taught him that got him through it.

"Coach Cal taught me to always fight and to never expect anything. I didn't get to see the floor a lot, but I fought every single day," said Beckham.

It seems Beckham has been fighting for something better his whole life. He grew up in some of the toughest projects in Louisville, where he says there were only two ways out-education or prison.

When basketball went away, something had to take its place. Beckham turned to his own story and found a new outlet in writing. He got his college education and wrote his first book Full Court Press in 2013.

"So I didn't know what my purpose was and with writing my books and seeing the impact of changing a life or inspiring people, I knew that was my purpose," said Beckham.

Beckham recently released his second book called Pressure. In it he talks about taking the pressures of life and turning it into joy. We caught up with him at Conway Middle in Louisville. He grew up just like many of these youngsters and he always passes around his championship ring as a reminder.

"You tell yourself when you touch this ring that dreams are real," said Beckham.

He now spends countless hours talking with youngsters and others encouraging them, but also teaching them about something important to him'

"Changing the culture is all about doing something different so you can get different results, if you do everything you've been doing your entire life and you haven't reached any type of success you have to change something," said Beckham.

He was a kid with the odds stacked against him, but says mentors loved him away from the trouble he could have gotten into. He hopes through the love he is now showing others and his new book people will learn one thing, something that now defines Twany Beckham.

"I hope when people read my new book and when you get to the end I just want you to smile and say hey that I can overcome anything," said Beckham.

You can find Beckham's latest book on Amazon right now. To hear more from Amber's conversation with the former Wildcat listen to her podcast, Uniquely Kentucky. You can search for it where you get your favorite podcast.

Read the original version of this article at www.wkyt.com.

Senior night celebration as No. 15 Kentucky defeats Georgia
Related Links
Comments are posted from viewers like you and do not always reflect the views of this station. powered by Disqus