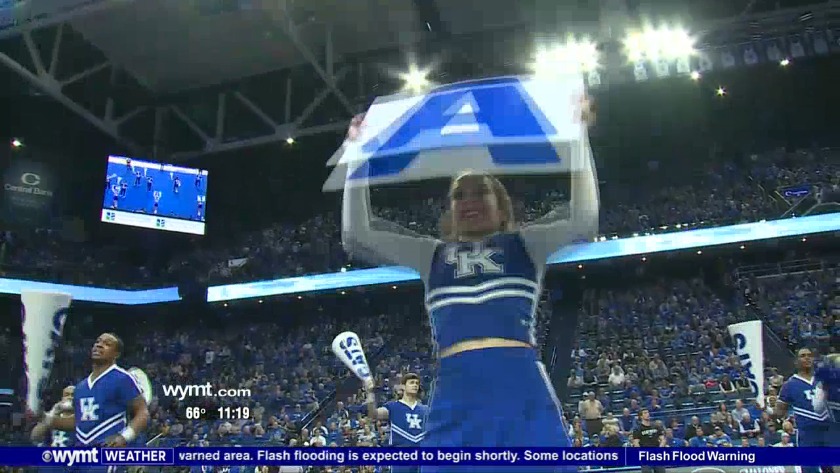 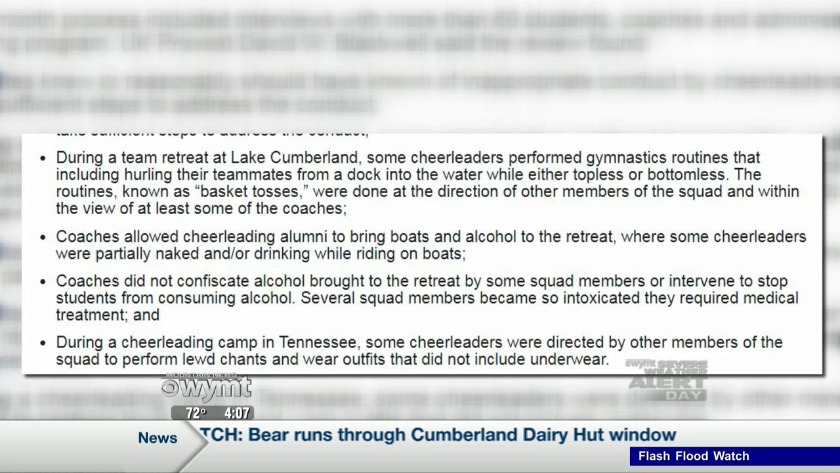 LEXINGTON, Ky. (WYMT) -- The University of Kentucky fired all four of its cheerleading coaches following a three-month investigation into hazing.

The investigation found coaching staff and the administrative advisor failed to provide reasonable oversight during off-campus events, where members of the cheerleading squad included hazing activities, alcohol use and public nudity.

The investigation also found T. Lynn Williamson, who served as the cheerleading program's advisor for four decades, had lax oversight and poor judgement.

Williamson retired days after learning of the investigation. Williamson was directed to have no contact with the cheerleading squad.

The investigation started in early February after a call from a concerned family member about possible inappropriate conduct by squad members and inadequate oversight by coaches during off-campus trips.

* During a team retreat at Lake Cumberland, some cheerleaders performed gymnastic routines including hurling their teammates from a dock into the water while either topless or bottomless. These routines, known as "basket tosses," were done at the direction of other members of the squad and within the view of a t least some of the coaches.

* Coaches allowed cheerleading alumni to bring boats and alcohol to the retreat, where some cheerleaders were partially naked and/or drinking while riding on boats.

* Coaches did not confiscate alcohol brought to the retreat by some squad members or intervene to stop students from drinking. Several members became so drunk they required medical treatment.

* During a cheerleading camp in Tennessee, some cheerleaders were told by other members of the squad to perform lewd chants and wear outfits that did not include underwear.

The investigation found no evidence of sexual assault or sexual misconduct during the trips.

In addition, the investigation also uncovered potential conflicts of interest for two members of the coaching staff.

Bell is also looking to hiring new coaching staff, including a national search for a new head coach.

In the past 35 years, UK's cheerleading program won 24 national championships.

“A commitment we make and renew every day at the University of Kentucky is that the success of our students is at the center of everything that we do. But for that sentiment to be more than words, we must always act in ways that honor that commitment — especially when we discover rare instances where those who supervise and guide our students don’t meet the standards of integrity we expect of each other. This is one of those times,” said UK President Eli Capilouto. “The University of Kentucky has built the nation’s premier collegiate cheerleading program. But regrettably, the integrity of the program has been compromised by inappropriate behavior by some squad members on off-campus trips and by lax oversight by the program’s coaches and advisor.”

From the court to the printer: Leslie County coach prints masks for healthcare workers

From the court to the printer: Leslie County coach prints masks for healthcare workers