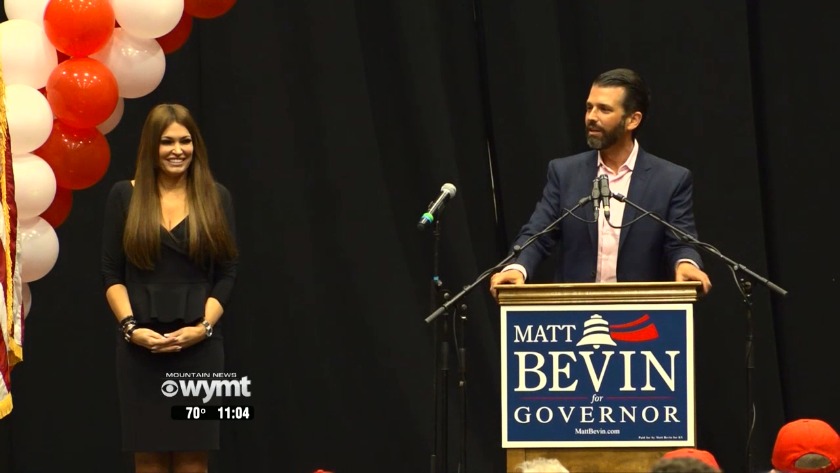 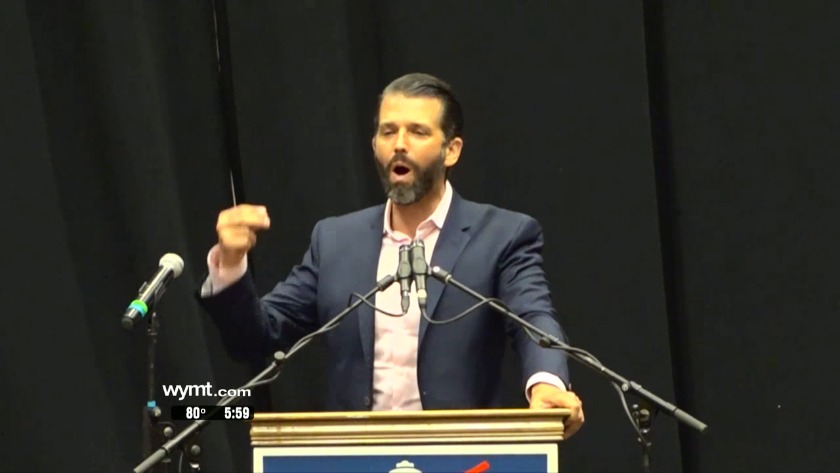 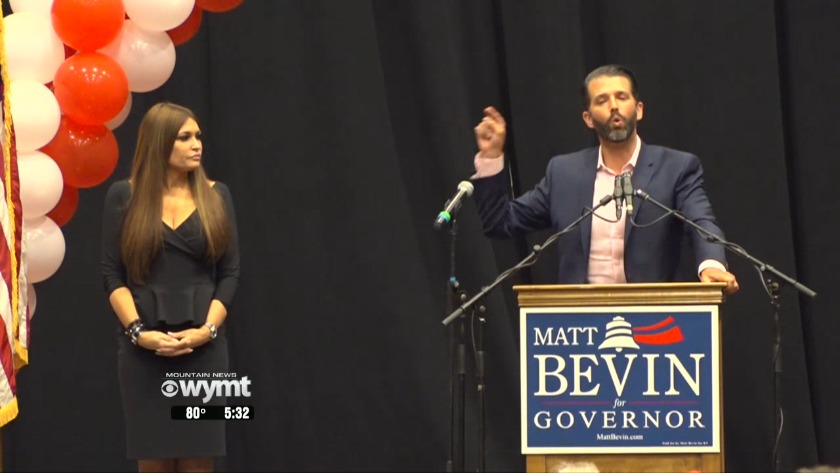 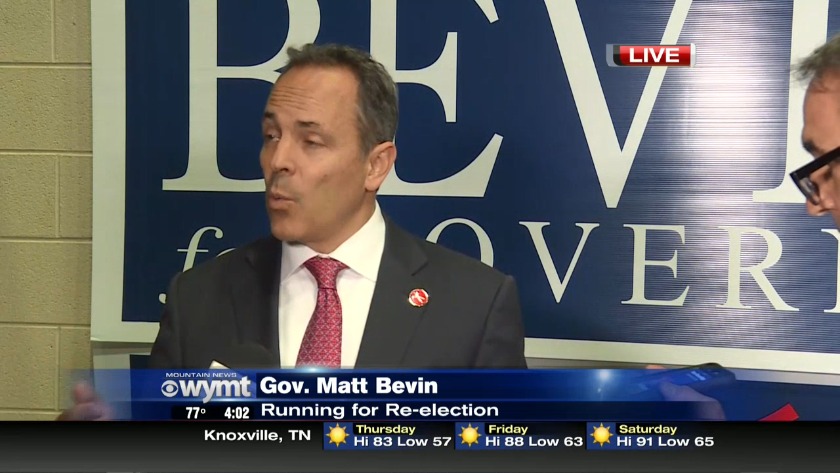 The rally at the Appalachian Wireless Arena started around 3:00 p.m. Thursday afternoon. It was a mixture of two campaigns that at times mirrored each other, one on the state level and one on the national level.

People lined the street outside the arena hours before Trump Jr.'s arrival. Many met and chatted on the sidewalk, preparing for the event, and happy for the chance to show their support for Bevin's reelection.

The first man in line, Jerry Palmer, said he was excited to see the rally happen in his hometown and he wanted to be among the first to join. He looked forward to the chance to meet the President's son and get his hat autographed.

"I love Donald Trump and his son's going to be here today. And I also love our governor. So I came to support all the candidates that I supported last time," Palmer said.

Hundreds of people from across the region, of all ages, ended up filling the arena floor.

"Donald Trump Jr. was in town, so I took off work to come see everybody. But especially Donald Trump Jr.," said supporter Joe Wells. "Was glad to hear everything he had to say. I even got to get my hat autographed by him, so I'm going to put this up as soon as I get home."

It is crucial that Gov. Bevin does well in Eastern Kentucky if he wants to be reelected. He did not strongly secure the area back in May when he ran against Robert Goforth. Trump Jr. made sure to let the crowd know that his father's agenda cannot be completed without Bevin in office.

"The CEO of your state is up for election in about seven weeks, the guy that goes and we opened up a plant today opening up 350 jobs in a place that needed it," said Trump Jr. "He is your chief marketing officer, he is your chief executive officer, he is selling Eastern Kentucky and bringing jobs here. He's the local extension of what my father is trying to do for the country. We need to make sure we have other people with that same mindset, again other people who don't need the job but want the jobs because they want to step up and fight for you."

Trump Jr. talked about his father's time in office and all of the backlash he faced. He also talked about his mother growing up under communist rule and how that shaped his life and thinking. He rounded it out by talking about why people should vote for his dad and Bevin.

At one point Trump Jr. stopped after a supporter fainted. Lt. governor candidate Dr. Alverado sprang into action and Trump Jr. said that is what you want to see from your elected officials - someone with experience and who jumps into action.

Many of the supporters came from the East Kentucky Advanced Manufacturing Institute in Paintsville to show their support for Bevin.

"Because he's such a huge supporter in us that we had to make a trip up here," said Thomas Mollett, an eKAMI student. "I'd just like to, I don't know, learn more about Matt Bevin."

"I like being able to help out and have fun," said Madeline Tyree, who used the day as a learning experience about government.

Before Bevin and Trump Jr. stopped in Pikeville, they made a quick stop for a private lunch fundraiser at Hazard Community and Technical College in Perry County. Students said they were excited to have Trump Jr. come to visit.

"I think it's really big for this campus, not a lot of people, like famous people come here and it's just really good seeing somebody actually come down here to Hazard, Kentucky and you know talk to us," said Canyon Mullins.

"I really think he's the American's President and I think it's awesome that he has his family involved as well. I think that's all they're there for is to help the people," said student Tracey Chesser.

Andy Beshear's campaign spokesman Sam Newton made the following statement about the rally:

“Matt Bevin’s small and poorly attended political event will do nothing to make the families of Eastern Kentucky forget how he’s attacked public education, ripped away health care, and insulted teachers. Under Governor Bevin, many Eastern Kentucky families are making less ever year. And Bevin has still failed to explain why his administration ignored a paycheck protection law for nearly 1,000 miners — and could have paid the Blackjewel miners in Harlan.”

The President's son was also in McCreary County for a ribbon-cutting bringing hundreds of jobs to the area. They also stopped in Northern Kentucky before the end of the day..