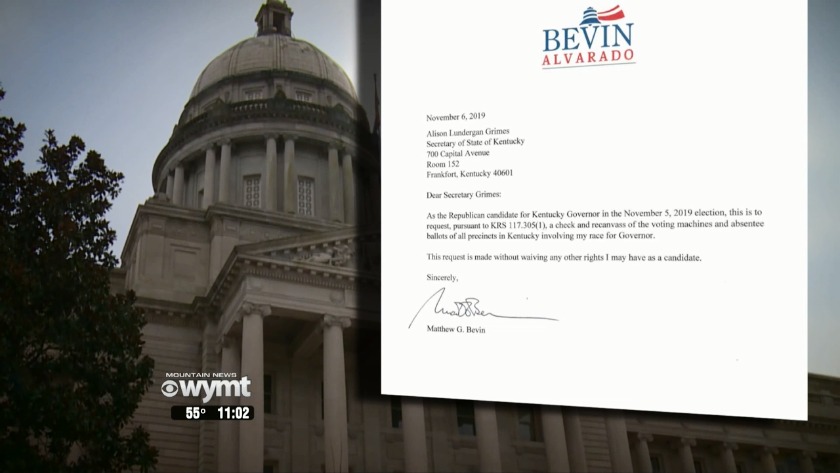 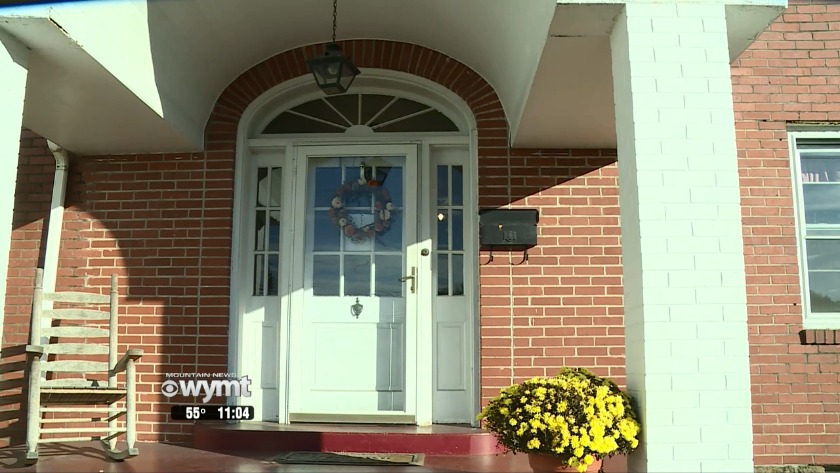 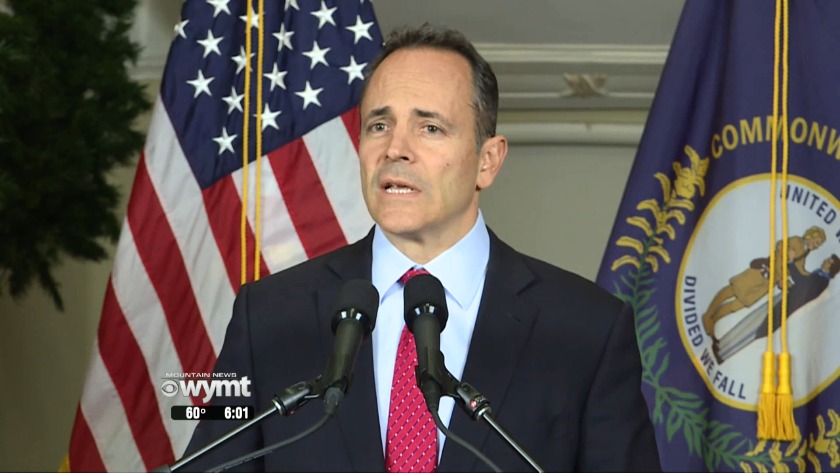 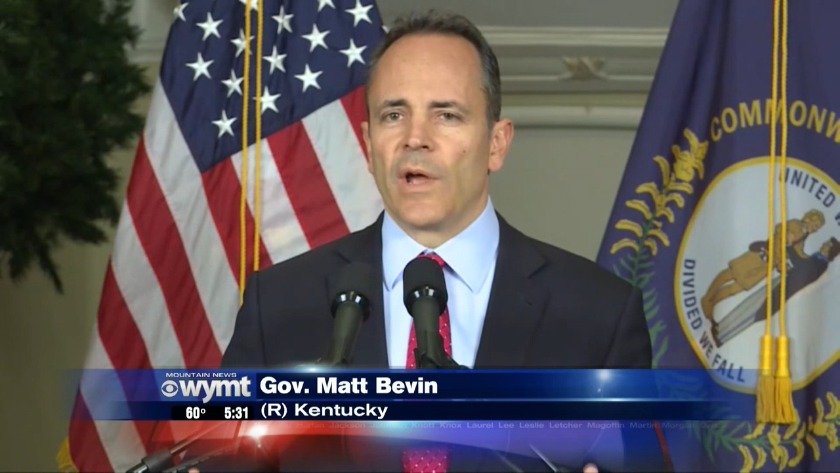 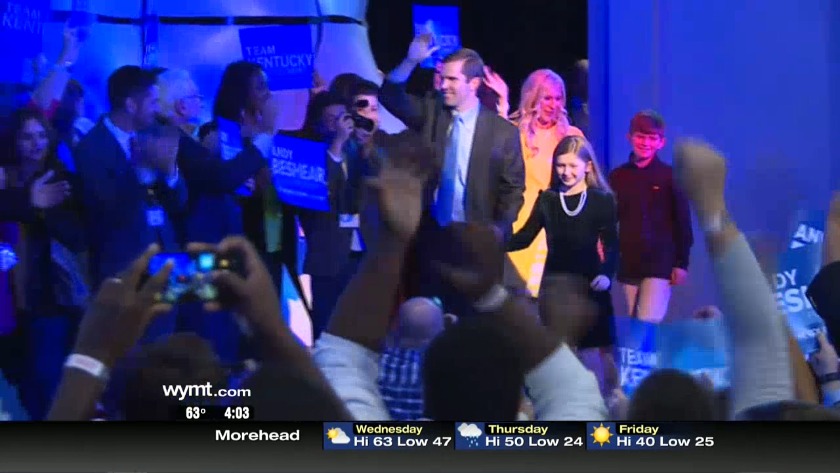 Bevin's campaign team sent Secretary of State Alison Lundergan Grimes' office the request Wednesday afternoon after the results came in too close to call. A recanvass is a check of the vote count to ensure the results were added correctly.

The governor then held a news conference at 5 p.m. following the request.

He stressed that he wants the people of Kentucky to know their voting process is safe and they got what they voted for. He even pointed out that he was frustrated with Secretary of State Allison Lundergan Grimes, saying that she does not have the best history and neither does her father.

"So for her to try to jump the gun on this and interject into this is a little suspect as well. We know there have been thousands of absentee ballots that were illegally counted. That is known. And this again is something that is being looked in to," Bevin said. "We know there are reports of people being turned away, being turned away from various voting booths from around the state. Again, things that need to corroborated, be looked into."

“The people of Kentucky deserve a fair and honest election. With reports of irregularities, we are exercising the right to ensure that every lawful vote was counted.”

In Bevin's follow-up speech, he referenced those claims of irregularities, especially in Jefferson County where Beshear dominated.

"What we know is that there really are a number of significant irregularities, the specifics of which we are in the process of getting affidavits and other information that will help us to get a better understanding of what did or did not happen," the governor said. "Those will be forthcoming in the days ahead but that is the cart getting ahead of the horse because none of this will be really followed through on until after the recanvassing process."

In the governor's speech Tuesday night, he said in no way is he conceding, joking that it would not be a Bevin race if it was not "a squeaker". This refers to when Bevin won his 2015 primary by only 86 votes.

Earlier Wednesday morning, Democrat Andy Beshear made his transition announcement, declaring that the race is over.

“Last night, the people of Kentucky elected Andy Beshear as their next governor. Today, Governor-Elect Beshear is already working on his transition so that he can best serve the people of Kentucky on day one. We hope that Matt Bevin honors the results of the recanvass, which will show he received fewer votes than Andy Beshear. As has been reported, a ‘recanvassing has never changed the result of a Kentucky election," said Beshear/Coleman Campaign Manager Eric Hyers.

Grimes reports the unofficial vote totals currently show Bevin with a 5,189-vote deficit. She said she forwarded the request to the State Board of Elections.

“Integrity in our elections processes is crucial, and Kentuckians deserve to know that their votes are properly counted and tabulated," said Grimes.

County boards of elections will meet on Thursday, November 14 at 9 a.m. to recanvass and file their reports immediately afterward. Grimes already said that if the current margin stays that way after the recanvas, it will not constitute a recount.

"While every vote does matter and does count, the margin here with a recanvass, if it is conducted and the results don't change, I wouldn't feel a contested proceeding before the general assembly would likely result in anything either," Grimes said.

On Tuesday, Senate President Robert Stivers mentioned the possibility of a recanvass, a recount and maybe even a contested proceeding. He clarified those comments on Wednesday.

"You think there was 1.4 million votes and the difference between the two candidates is before 4 and 5 thousand. That's less than half a percent so it's appropriate that he requested," Stivers said.

Stivers said he instructed his staff two weeks ago to look at too-close-to-call scenarios. He even said before the election he expected just a one-point difference.

He said while Bevin had many successes as governor, people shut down his message because of his rhetoric and Beshear made the election about personality.

"He wanted to make it a personality race instead of a policy. He was specifically vague on, 'Well I want to do this this and this,' but no specifics but you know you saw the commercials. Everyone else talked about respect and how people were treated and things of that nature, so he tried to make it about personality," said Stivers.

Stivers says he will work with Beshear, but reminds people Republicans hold the majority in the legislature.

She also says Bevin does have some options moving forward. The first option is requesting a recanvass, which we have already seen he has requested.

"The second procedure would be a contest proceeding, something that is wholly governed by Kentucky statute that would occur before the General Assembly," said Grimes.

Bevin could still file an election contest with the General Assembly after the recanvass. He has up to 30 days after the votes are certified to do that.

Bevin must contest the election in order to receive a recount of the votes. If that process is initiated, the General Assembly would form a committee of 11 randomly selected lawmakers that could take depositions, order a recount and make a recommendation to the full legislature.